Let me introduce you: The Accordion

It is quite right to say that instrumentalists do not "physically" know their instrument well; that they often know too little about its history, about its construction. 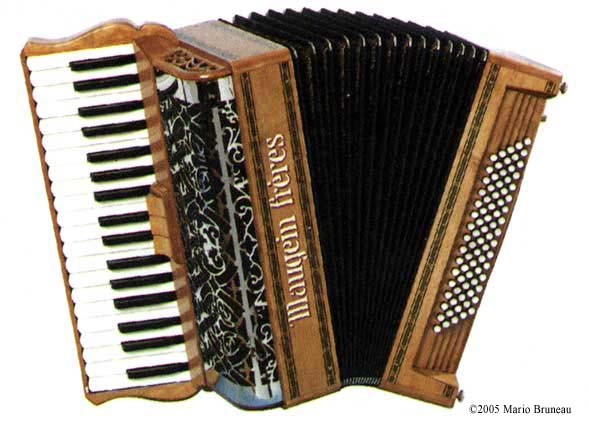 The accordionist is no exception to this rule. While the accordion remains, in the 20th century, one of the most played instruments in the world, one of the most popular, its followers are generally far from imagining the eventful adventures and the fascinating interest of its history.

The accordion was born in Vienna in 1829. It is a child of Romanticism. He was the plaything of the ladies in the bourgeois salons: his expressive power was all the enthusiast there. Then, equipped with a second keyboard for the left hand, he soon took to the streets, then to penetrate to the depths of the countryside. Its popularity, from the end of the 19th century, was immense. His industry broke all records. Whole boats full of accordions were exported to America. Manufacturers competed in ingenuity. In the Paris of 1900, he was the king of the "musette" genre. He leads the way around the world, seduces singers, his charm inspires poets. However, the very device that made him successful - the fixed accompaniment chords - despite the most ingenious improvements, kept him from gaining access to "great" music for a long time, until the relatively recent day when the possibility of renouncing prepared chords or even their pure and simple elimination makes it possible to approach all genres of musical writing.

It is this extraordinary journey accomplished in an exceptionally short time (a century and a half) that we invite you to repeat in this book. The destiny of the accordion is not only a unique case in the history of musical instruments, it is also, as we will see, a phenomenon of great ethnomusicological and sociological interest

The "cultural nomadism" of our instrument, its casualness in the face of social barriers, which, in particular, took it from living rooms to the street, then back to the dance floor at the concert hall, has the tendency of annoy some. They forget, however, that the flute was born from the pipe of the shepherds; that the piano had the manichodion as its point of departure; that the prestigious violin was for a long time the instrument of fiddlers. Modest instruments yesterday, they have become the spokespersons for the most elaborate music. The difference is that this evolution has been much slower for these instruments than for the accordion, a creation of modern times.

And it is the wrong question to ask whether an instrument can claim to play "great music" when it has come into popular vogue. In truth, a genre of music does not depend on the instrument, but on the instrumentalist, on his taste, his culture, his way of conceiving music. In the field of the accordion, for lack of a single model, the way of thinking about music is linked to the instruments offered. Manufacturers have offered models for playing melodies, models for dancing, "mixed" models, and countless prototypes have emerged from the hands of avid hobbyists. The first accordions had a single keyboard, with 5 keys at first, to go up to 30 keys from 1830 to 1850. From the middle of the 19th century appeared a second keyboard, called "accompaniment", of 2, then 4 , then 8, then 16 buttons, and which suddenly increased to 150 buttons, just before 1899. After 1900, the first keyboard resumed its evolution and went from one to two then three rows. From the association of two very distinct keyboards, one for the melody, the other for the harmony and the rhythm, was to be born the traditional accordion. And it is from its conquests, but by trying to overcome its constraints, that today passionate followers of their instrument are working to subject the accordion to the ultimate mutations that will give it a place in its own right in the musical practice.

If our instrument appeared with Romanticism, we are entitled to ask ourselves the question of its ancestors, its genealogy. When one undertakes the history of his favorite instrument, one is always tempted to demonstrate that it represents the oldest means of musical expression. Without falling into this error, after having isolated the sound principle used by the accordion, that is to say the free reed, we will go and look for traces of it not only in the West, but also in Asia where it has been known since millennia.

After which we will follow step by step the eventful and dazzling career of the accordion itself, starting from the modest toy of the Viennese Demian to end up with the concert instruments adopted today by accomplished musicians such as Alain Abbott, Grand Prix de Rome.

The 19th century saw the appearance of an abundance of models, prototypes and patents which testify to an obstinate search in a direction that is easy to understand: what we wanted to create at the time was, on the principle of the metal free reed, a portable instrument, with virtually unalterable tuning, and able to "spin" one or more simultaneous sounds. In the midst of innumerable and sometimes preposterous attempts, the accordion emerged victorious – although its faults were, depending on the point of view, more apparent than its qualities. But as soon as we succeeded in enclosing the free reed system in a box ventilated by a hand bellows controlling the intensity, a great step was accomplished. The problem of expression, a priority at the time, was solved. On the other hand, that of harmonic "freedom" was not for both keyboards.

The creation of the "chromatic" accordion, which to a large extent supplanted the "diatonic", did not provide a solution to this musical obstacle, since it still imprisoned the performer in the yoke of chords. immutable. However, this peculiarity (one key = one chord) characteristic of the second keyboard of the accordion contributed to its success by putting harmony within everyone's reach.

While countless manufactures of traditional accordions, always more perfected, multiplied in Italy, France and all over Europe, a few motivated craftsmen persevered in their research to make this modest box at the start a musical instrument truly worthy of this name.

While most of the instruments in use today (apart from electronics) seem to have reached an almost perfect state, we note that the evolution of the accordion continues in contemporary times.

Supported by documentation drawn from the most serious and very often first-hand sources, this website, which deals with the origins of the accordion, the methods it inspired, its playing, finally its interpreters, should make a stop to too many erroneous descriptions, often repeated in dictionaries, which generally date back more than a century and which can only confuse people's minds.

On the one hand, the simple music lover sensitive to the expressive generosity of the accordion, on the other the composer curious about the specific possibilities of the instrument will find here, we hope, the answers to their questions. But it is above all for accordionists themselves that this website is intended, dedicated to what Norbert Dufourcq called "the great romantic".