The difference between the cabinets of chromatic accordions from the piano accordion's cabinet.

Yes, there is a difference between the two

The best known of the accordionists who made this choice is undoubtedly Richard Galliano*. He had a chromatic accordion (with fewer buttons) built from a piano accordion body by Victoria from Castelfidardo.

Indeed, a chromatic button accordion will always sound clearer and therefore with more harmonics and more staccato and detached than a piano keyboard accordion which sounds duller, rounder and with a more legato quality. There are many factors that come into consideration but I will only cover the most important ones.

The sound of our accordions is produced inside of it. There are therefore obstacles that prevent the sound from coming out freely.

First there is the skin inside the reedblock, the one that obstructs the free flow of sound when you push the bellows. Did you notice it? The sound is duller and weaker when pushing the bellows than by pulling it! It's because of that skin that gets in the way.

Then there are the valves. Covered with a felt, they muffle the sound. It is therefore in our interest to keep them as far away as possible from the soundboard. The further they move away from the source, therefore, from the soundboard when they are activated, the less they hinder the free flow of the sound of the reeds which are behind this soundboard, inside the accordion. This is especially the case for diatonic accordions but also for your chromatic button accordions compared to piano accordions with little distance.

Experience talking to someone directly in front of you 1 meter away. Ask him to repeat the same sentence over and over, alternating between an obstacle, either by placing his two closed hands 4 centimeters in front of his mouth for 2 seconds and then removing them for another 2 seconds, and so on. You will hear a distinct difference. Dull, clear, etc...

Button keyboards are shallower (closer to the grille) than piano keyboards. 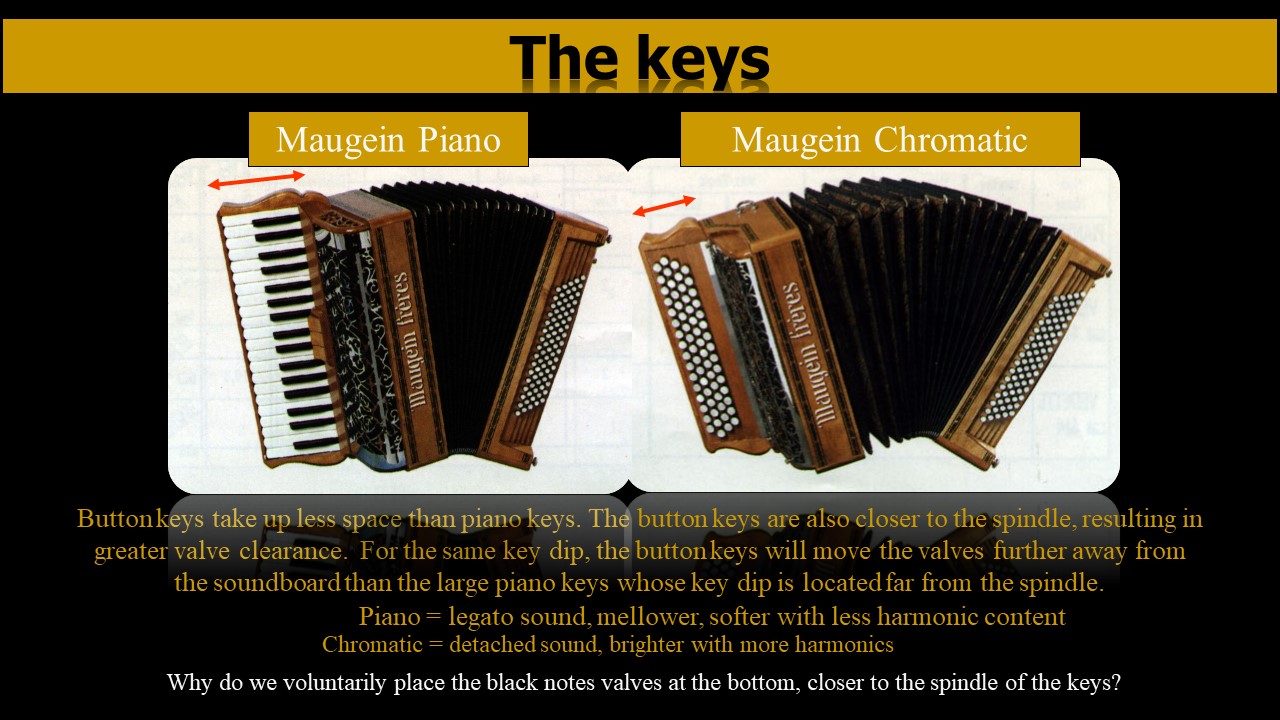 A piano key occupies the entire width of the keyboard while in the space occupied by one piano key, you can place 4 or 5 buttons. That's why chromatic accordions have more notes than the piano accordions. Additionally, the closer the key is to the axle rod (spindle) or close to the grille, the more valve clearance there will be thus a clearer sound, flashy, detached, pistonnade, musette, etc. As you will have understood, the buttons are closer to the pivot or the grille than the piano keys, which are always at the furthest edge of the keyboard, resulting in a duller, rounder, legato, muffled sound, etc. So, based on this principle, will the black keys of the piano keyboard sound brighter and richer since being closer to the pivot, they will move the valve further away? No, this is not the case because to compensate this, we have deliberately placed their valves towards the inside, that is to say the row of valves closer to the keyboard.

Unlike the keys, the further the valve is from the axle rod (spindle), the more it will be cleared from the soundboard and therefore offering less obstacle to the sound.  It will sound clear, detached, rich in harmonics, etc. ... So, we place the valves of the black keys of the piano keyboards in the row closer to the keyboard, at the bottom, near the axle rod. This compensates for their favourable key position near the grille which will give approximately the same valve clearance as the white keys. 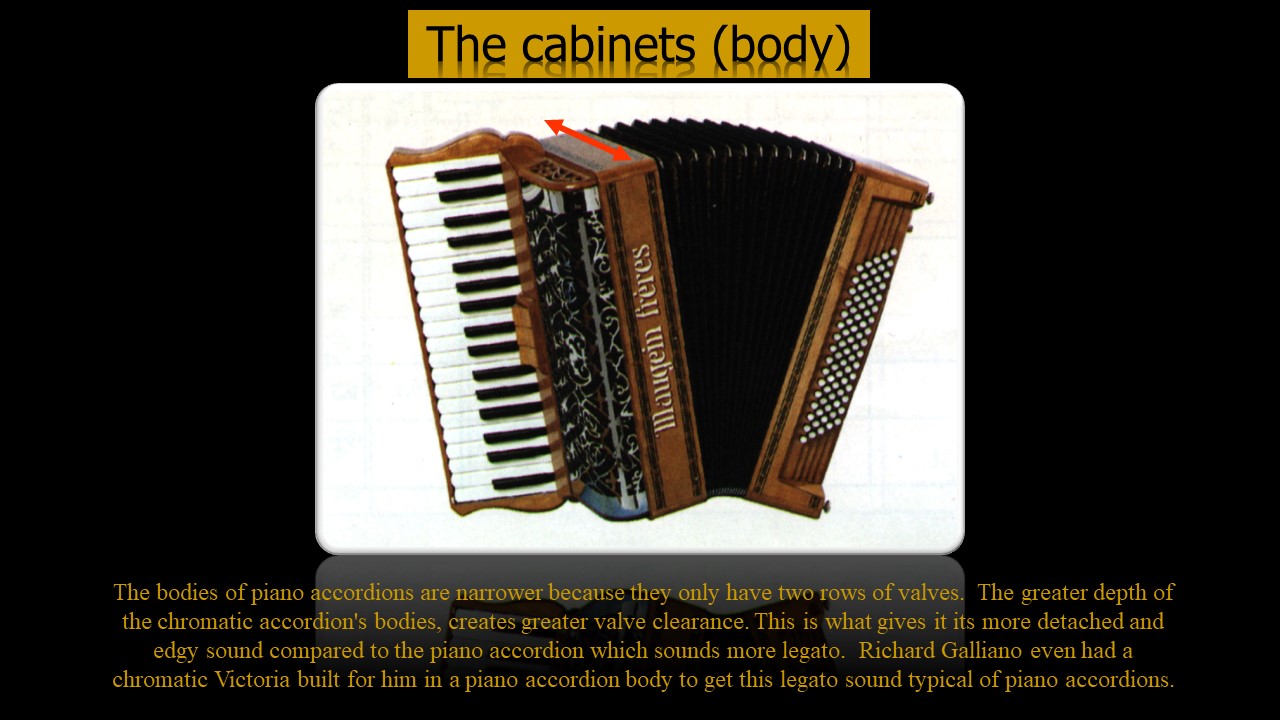 It is this sound quality of roundness, legato that Richard Galliano appreciates since he likes to play Jazz. He had a chromatic accordion made in a piano case.

On the other hand, the button chromatic cabinet is thicker and further from the accordionist's body than the piano cabinet which is, closer to the body. It's true that the piano cabinet is less painful for the back than the chromatic cabinet which has a leverage effect, hence a greater weight which "pulls" on the accordionist's back. Hold a weight away from your body or at arm's length and you won't resist for as long as if you held it close to your body. But this greater cabinet thickness of the chromatic buttons also contributes to its clearer, brighter sound, rich in harmonics and with a detached quality, etc... 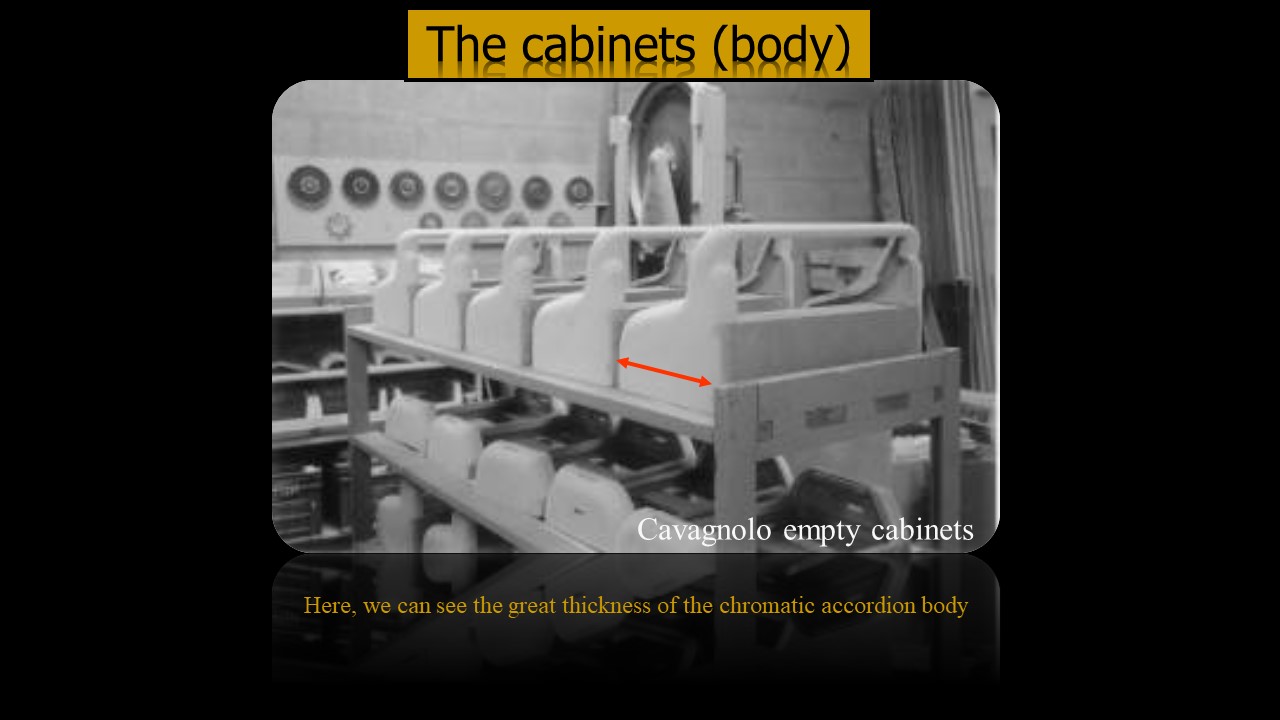 Indeed, the further the valves are from the keyboard, as is the case with your chromatic button accordions, the more clearance they will have, hence another favorable factor for a flashy, brilliant sound, rich in harmonics, staccato, detached, etc...

Finally, there is the grille. Real obstacle to the free flow of sound. In France you are spoiled with your Maugein and Cavagnolo grilles. They are real laces, almost no surface to prevent the sound from coming out! Italian accordions almost always have a closed grille, therefore a more muted and "closed-in" sound. 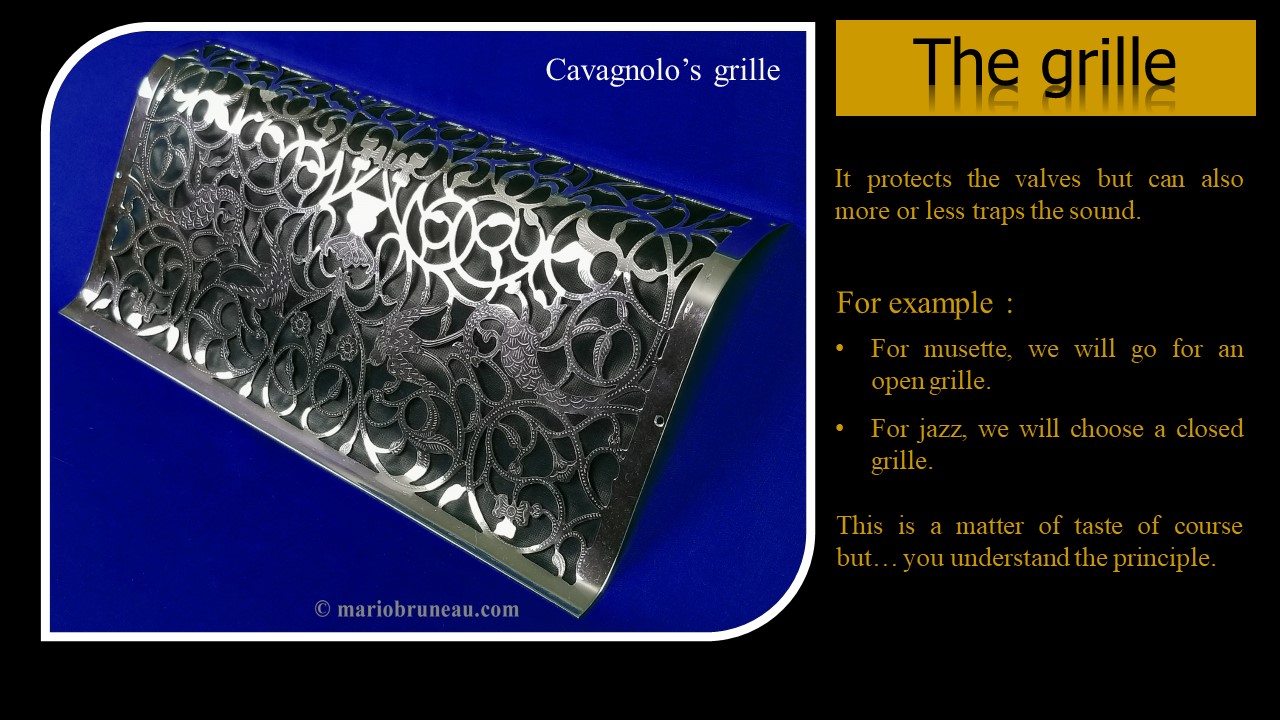